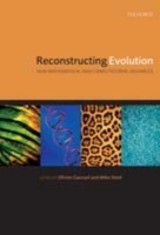 Evolution is a complex process, acting at multiple scales, from DNA sequences and proteins to populations of species. Understanding and reconstructing evolution is of major importance in numerous subfields of biology. For example, phylogenetics and sequence evolution is central to comparative genomics, attempts to decipher genomes, and molecular epidemiology. Phylogenetics is also the focal point of large-scale international biodiversity assessment initiatives suchas the 'Tree of Life' project, which aims to build the evolutionary tree for all extant species. Since the pioneering work in phylogenetics in the 1960s, models have become increasingly sophisticated to account for the inherent complexity of evolution. They rely heavily on mathematics and aim at modelling and analyzing biological phenomena such as horizontal gene transfer, heterogeneity of mutation, and speciation and extinction processes. This book presents these recent models, their biological relevance, their mathematical basis, their properties, and the algorithms to infer them fromdata. A number of subfields from mathematics and computer science are involved: combinatorics, graph theory, stringology, probabilistic and Markov models, information theory, statistical inference, Monte Carlo methods, continuous and discrete algorithmics. This book arises from the Mathematics of Evolution & Phylogenetics meeting at the Mathematical Institute Henri Poincar Paris, in June 2005 and is based on the outstanding state-of-the-art reports presented by the conference speakers. Ten chapters - based around five themes - provide a detailed overview of key topics, from the underlying concepts to the latest results, some of which are at the forefront of current research.