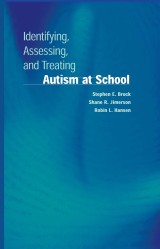 <P>There is no other recently published book on this topic dedicated to school psychologists and other educational professionals.</P>
<P></P>
<P>Focuses on the assessment, identification, and treatment of students in the school context.</P>
<P></P>
<P>Unlike competing works, this would be an authored (not edited) volume and will, therefore, be much more focused and specific.- This book will be very practical and applied in its orientation. It will give readers direction that they can immediately follow in their school-based practice.- This book will clearly identifies the roles and responsibilities of educational professionals and school psychologists in identification of students with autism.</P>

<P>As the rate of autism diagnosis continues to escalate, awareness and recognition of this developmental brain disorder – as well as a demand for services – are also mushrooming. School districts, already struggling under the weight of withering budgets and increasing enrollments, are now scrambling to strike a balance between the types of services and treatments parents want for their children and what the school system can afford to provide. Consequently, a broad cross-section of professionals and parents are searching for the means and methods by which to identify and address the wide-ranging educational needs of the children with autism spectrum disorder.</P>
<P></P>
<P><EM>Identifying, Assessing, and Treating Autism at School</EM> provides a one-stop resource that enables school psychologists to coordinate efforts between students and parents as well as other educators, administrators, and social services providers to determine which interventions are likely to be most effective in meeting the unique needs of children with autism. This volume, designed as a practical, easy-to-use reference for school psychologists and other educational professionals:</P>
<P></P>
<UL>
<P>
<LI>Makes the case for why school psychologists and their colleagues need to be more prepared, willing, and able to identify and serve students with autism.</LI>
<P></P>
<P>
<LI>Identifies the causes, prevalence, and associated conditions of autism spectrum disorders.</LI>
<P></P>
<P>
<LI>Provides a review of screening, referral, and diagnostic assessment processes.</LI>
<P></P>
<P>
<LI>Offers much-needed guidance on conducting psychoeducational assessments.</LI>
<P></P>
<P>
<LI>Reviews appropriate treatments for students with autism.</LI>
<P></P></UL>
<P></P>
<P>School psychologists, general and special educators, counselors, and social workers will find <EM>Identifying, Assessing, and Treating Autism at School</EM> an invaluable resource.</P>
<P>“This book is an invaluable resource not only for school psychologists but for other professionals and parents as well.&nbsp; It provides an excellent overview of the assessment and treatment of autism and related disorders and outlines with impressive clarity&nbsp;the interventions that can be provided for students with autism in schools.&nbsp; I am certain that this book will be read and reread for the wealth of information it presents.” <BR>-Robert B. Brooks, Harvard Medical School, Coauthor of&nbsp;<EM>Raising Resilient Children</P></EM>

<P>Dr. Stephen E. Brock, NCSP, is a professor at California State University, Sacramento. Previously, he worked for 18 years as a school psychologist with the Lodi Unified School District (the last six of which included assignments as Lead Psychologist and member of an autism specialty team). His professional preparation includes a Ph.D. at the University of California, Davis where he researched AD/HD. Dr. Brock currently serves on the editorial boards of both state and national school psychology association newsletters and is an Associate Editor of The California School Psychologist (a peer peer-reviewed journal with the second largest distribution of school psychology journals in the United States). He is President of the California Association of School Psychologists and a member of the National Association of School Psychologists Delegate Assembly. Dr. Brock has authored over 100 publications (including three books) and has made over 60 referred or invited state/national conference presentations. In addition to autism, his academic work has included study of school crisis response, suicide prevention, ADHD, behavioral interventions, violence prevention, threat assessment, child development, and reading comprehension.</P>
<P>Dr. Shane R. Jimerson, NCSP, is a professor at the University of California, Santa Barbara and the author and co-author of numerous journal articles, chapters, and books. He has instructed graduate level seminars in Developmental Psychopathology during the past six years, and his scholarship and contributions to the field have been recognized nationally. For example, he received the Best Research Article Award from the Society for the Study of School Psychology in 1998 and again in 2000. He also received the 2001 Outstanding Research Article of the Year from the National Association of School Psychologists / School Psychology Review. Dr. Jimerson also received the 2002 Early Career Scholar Award from the American Educational Research Association: Division E Human Development. During 2003, Dr. Jimerson received the Lightner Witmer Early Career Contributions Award from Division 16 (School Psychology) of the American Psychological Association. In addition to his scholarly writing, Dr. Jimerson has provided related lectures and presentations at conferences and other professional sessions throughout the state, across the nation, and around the world. Dr. Jimerson is also the co-author of a 5 book Mourning Child Grief Support Group Curriculum series (published by Taylor and Francis 2001). He is the Editor of The California School Psychologist journal, an Associate Editor of School Psychology Review, and serves on the Editorial Boards of the Journal of School Psychology, School Psychology Quarterly, Journal of Early Childhood Research and Practice, and also provides professional reviews of manuscripts for Psychology in the Schools, Review of Educational Research, and Journal of Educational Psychology. </P>
<P>Dr. Robin L. Hansen, M.D.,<STRONG> </STRONG>is a professor at the University of California, Davis Medical Center; Director of Clinical Programs, M.I.N.D. Institute; and Chief of Developmental-Behavioral Pediatrics. She is the author and co-author of numerous journal articles and book chapters. Her professional preparation includes a M.D. at the University of California, Davis; Residency at the Oakland Children’s Hospital and Medical Center; and Fellowship at the John F. Kennedy Child Development Center, University of Colorado Health Sciences Center. Dr. Hansen is a developmental-behavioral pediatrician and researcher with vast experience in treating children with neurodevelopmental problems, including pervasive developmental disorder, autism, learning disorders, and attention deficits. She heads a multidisciplinary clinic that diagnoses children, plans and initiates intervention strategies, and works closely with patient families. Her clinical research has included the etiologic diagnosis of pervasive developmental disorders such as autism. </P>

<p>No other recently published book on this topic dedicated to school psychologists and other educational professionals</p><p>Focuses on the assessment, identification, and treatment of students in the school context</p><p>Unlike competing works, this would be an authored (not edited) volume and will, therefore, be much more focused and specific</p><p>Very practical and applied in its orientation</p><p>Gives readers direction that they can immediately follow in their school-based practice</p><p>Identifies the roles and responsibilities of educational professionals and school psychologists in identification of students with autism</p>

<P>This practitioner-focused book provides school psychologists and other educational professionals with the information they need to be more fully prepared to serve students with autism. After a brief introduction to the topic of autism spectrum disorders and an overview of the book, the text explores the complex etiology of autism, and provides the reader with a review of epidemiological issues. Three chapters offer information essential to the identification of autism. The book concludes with a summary of treatment research.</P>