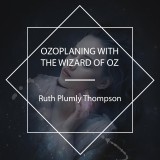 Ozoplaning with the Wizard of Oz

The wonderful but quirky Wizard of Oz has invented a plane to go strato-sphering. Zooming among the clouds and shooting stars above OZ certainly produces a host of strange adventures. This last book about OZ by Ruth Thompson includes many well known characters of that fairy land like the Wizard, Dorothy, The Tin Man, and The Cowardly Lion but has some that have been a bit overlooked before like Jellia Jam, Ozma's chief maid-in-waiting and The Soldier With Green Whiskers. A high flying tale with danger and excitement! But don't worry, everyone will come through in the end just fine. - I promise!

An avid reader of Baum's books and a lifelong children's writer, Thompson was born in Philadelphia, Pennsylvania and began her writing career in 1914 when she took a job with the Philadelphia Public Ledger; she wrote a weekly children's column for the newspaper. She had already published her first children's book, The Perhappsy Chaps, and her second, The Princess of Cozytown, was pending publication when William Lee, vice president of Baum's publisher Reilly & Lee, solicited Thompson to continue the Oz series. (Rumors among fans that Thompson was Baum's niece were untrue.) Between 1921 and 1939, she wrote one Oz book a year. (Thompson was the primary supporter of her widowed mother and invalid sister, so that the annual income from the Oz books was important for her financial circumstances.)

Thompson's contributions to the Oz series are lively and imaginative, featuring a wide range of colorful and unusual characters. However, one particular theme repeats over and over throughout her novels, with little variation. Typically in each of Thompson's Oz novels, a child (usually from America) and a supernatural companion (usually a talking animal), while traveling through Oz or one of the neighboring regions, find themselves in an obscure community where the inhabitants engage in a single activity. The inhabitants of this community then capture the travelers, and force them to participate in this same activity.

Another major theme has elderly characters, most controversially, the Good Witch of the North, being restored to "marriageable" age, possibly because Thompson herself never married. She had a greater tendency toward the use of romantic love stories (which Baum usually avoided in his fairy tales, with about 4 exceptions). While Baum's child protagonists tended to be little girls, Thompson's were boys. She emphasized humor to a greater extent than Baum did, and always considered her work for children, whereas Baum, while first and foremost considering his child audience, knew that his readership comprised all ages.

Thompson's last Oz story, The Enchanted Island of Oz(1976), was not originally written as an Oz book.