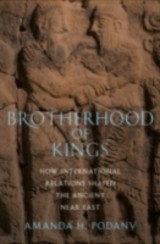 How International Relations Shaped the Ancient Near East

Amanda Podany here takes readers on a vivid tour through a thousand years of ancient Near Eastern history, from 2300 to 1300 BCE, paying particular attention to the lively interactions that took place between the great kings of the day. Allowing them to speak in their own words, Podany reveals how these leaders and their ambassadors devised a remarkably sophisticated system of diplomacy and trade. What the kings forged, as they saw it, was a relationship of friends-brothers-across hundreds of miles. Over centuries they worked out ways for their ambassadors to travel safely to one another's capitals, they created formal rules of interaction and ways to work out disagreements, they agreed to treaties and abided by them, and their efforts had paid off with the exchange of luxury goods that each country wanted from the other. Tied to one another through peace treaties and powerful obligations, they were also often bound together as in-laws, as a result of marrying one another's daughters. These rulers had almost never met one another in person, but they felt a strong connection--a real brotherhood--which gradually made wars between them less common. Indeed, any one of the great powers of the time could have tried to take over the others through warfare, but diplomacy usually prevailed and provided a respite from bloodshed. Instead of fighting, the kings learned from one another, and cooperated in peace. A remarkable account of a pivotal moment in world history--the establishment of international diplomacy thousands of years before the United Nations--Brotherhood of Kings offers a vibrantly written history of the region often known as the &quote;cradle of civilization.&quote;